Today marks my 4 year anniversary of owning a restaurant in Springfield, Tennessee. Holy Moly. I was only 26 years old when I decided that I was tired of modeling and wanted a change. My husband (fiance at the time) and I moved to a small town outside of Nashville (where my family had recently moved) and decided to open a farm-to-table fine-dining restaurant. We knew next to nothing about the town or the people, but he went to culinary school and is an incredible chef, I loved baking and eating, and that seemed to make me somewhat qualified for the position!

In hindsight, we were young and dumb and way too ambitious for our location, but ignorance is bliss and we marched right into that tiny, dusty, bug-infested, ridiculously priced building with our heads held high, ready to show people what we could do.

Our landlord must have seen us coming from a mile away. We had no idea how much we should have paid for a storefront in Springfield. In hindsight, our neighbors were paying $300/month. Our building was less than 1000 square feet, had no back door, no exhaust system, had recently been bug bombed but the dead bugs had never cleaned up, and the previous owner left all of their crap there, including dirty dishes. We were asked to pay $1200/month for the space and excitedly agreed. Coming from London, this was a great price! But there weren't any other businesses on the square. The only traffic we had was from the beautiful courthouse and law offices, but people were not flocking to the historic square because it was teeming with restaurants and shops.

Me adding our window clings right before opening day!

After opening, we began to meet our demographic. In Springfield, chain restaurants are always slammed and most new small businesses close within a matter of months. The two staple restaurants in town are Torinos (open for over 30 years), and The Depot (open for almost 15 years). Even The Depot tried to expand their concept and open another restaurant and it closed within the year. You could definitely say that people here do not like change.

Moving to town from London, being a well-traveled model, 26 years old, and opening a farm-to-table fine-dining restaurant, most people made up their minds about me and the business way before they set foot in our establishment. When I told customers that we sourced all of our steaks and produce locally, they said, "Why?" I was floored. No one else in town sourced locally so what did I think; That I was better?? Sweet Lord, baby Jesus. We didn't think we were better. We were just trying to run a business with integrity. My poor husband did his best to incorporate his skills into a menu that would fit into the boxes that would also make local diners happy, but it was an uphill battle. I had people send their ribeyes back because they were "used to the quality of Outback steakhouse" and our beef was somehow considered sub par to that. I had a woman snap at me and yell at me because her husband's caprese omelet had "black stuff" on it, which was the balsamic reduction drizzle. I had a man literally storm out, yelling, "This is an outrage!" because we didn't serve ranch. I literally sobbed in dry storage after an elderly gentleman raked me over the coals, relentlessly. My water was too cold, the glasses produced too much condensation, the burgers needed American flag toothpicks... Nothing I could do was correct! It wrecked Ian and I, physically, psychologically, emotionally, financially, probably in ways that we don't even know about yet.

Some of my early staff at Whitney Lee's. <3

We were trying as hard as we could to make everyone happy, and no matter what we did, we couldn't please everyone. Maybe it wasn't personal. Maybe the woman who told the whole neighborhood that she hated our restaurant without ever setting foot inside genuinely hated the concept and didn't just hate me for being a 26 year old woman who had traveled the world, had a handsome, loving husband, and modeled as a career, where as she had none of those things. Maybe I shouldn't assume that some people were just jealous and trying to bring me down because misery loves company. I suppose I'll never know, but I will say this; Regardless of their intention, the people who have brought the most stress and negativity into my life are the reason that I am as successful as I am. I thrive on the negativity of others, and there is no shortage of negativity in Springfield. Don't get me wrong, I love our sweet little town and I will write more on that, but above anything else, it's the customers who sat in my booths, at my restaurant, within arms length of me, and loudly said, "they won't make it through the year" or "I give it a month, max." Those people are the reason the Ian and I pushed through everything and not only survived, but flourished. Suck an egg, haters! 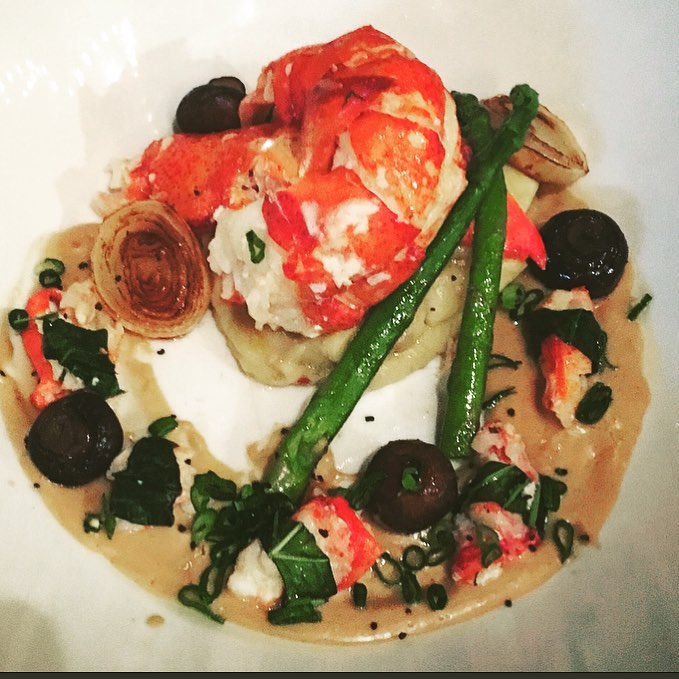 That being said, the people who understood our concept loved us, and we loved them. I have had more than one customer cry because our food is so incredible and my heart literally radiates with joy while writing that. People would say, "Finally, we don't have to drive all the way to Nashville to have a decent meal!" We have had people drive in from Kentucky, Alabama, North Carolina. We've had people fly in from Italy and even China! I mean, I'm sure they other things in America too, but their intent was to come dine at our restaurant!

What's even more important than people liking what we're serving is the people that we've met along the way. Michael and Geppe came in the first night that we were open, before we even had our liquor license, and four years later, they had lunch at our restaurant today! They have become lifelong friends, like so many others. The Wallace family would come to Whitney Lee's at least once a week with their granddaughters and we've seen them grow over the years, spent late nights chatting with them about boys, jumping up and down when the eldest got her first car, and even sharing in the joy of sending her off to college. Whenever the Riley's come in, I bring little Ava up into the cafe and we make smoothies together, even though we both just eat sprinkles and bring smoothies to the rest of the family. Ian and I are at the restaurant every single day and the people who come in, especially regularly, they aren't just random customers, they are friends, even family to us. They mean more to us than I could ever put into words.

Ian and I have lost so many family members and friends to our schedules. Some people just can't understand why we can't ever spend a Thanksgiving, Christmas, or New Year's Eve with them anymore. They don't get why we can't hang out on a Friday night, or call them over the weekend when they aren't working. They take it personally. We work 17 hours/day, 6 days a week. If you don't come into the restaurant, we will not see you and it isn't because we want it to be that way. This is our sacrifice to the business. This is why the friendships and bonds that we have made over the past 4 years, forged in kitchen fire, are so meaningful to us.

This lady keeps me sane. Thank you, Eliza!

We also revitalized business on the Springfield square. I can't take all of the credit for this of course, but in the following year that we opened Whitney Lee's, 9 new businesses opened on the square. Before that, there were only two for years. Since then, we have almost 30 new businesses. It's been an incredible change in the community.

I should probably get back to the restaurant itself. After being in business for 2 years as Whitey Lee's, we were finally able to get out of our ridiculous lease and move to a larger, fully renovated building, for almost the same rent cost. Whitney Lee's was very successful, but with the demographic being what it was, we knew that we couldn't fill a huge building with customers if we were only doing fine-dining. We kept our iconic dishes, but we wanted to make it multi-concept and added a cafe in the front for organic, locally roasted coffees, ice cream, casual dining, and candy. Through the vault door (it was originally a laundromat and they stored the furs in the vault), we have our main dining room and it is beautiful. We have chandeliers, a huge granite bar, local art work, and even a stage for live music. We also have an incredible outdoor patio for dining with another granite bar. It is so much more "us" than the last building was.

Cheers to getting it right! Me on the outside patio

I won't lie and say that switching building and changing the name to "Copper Vault" didn't have it's setbacks, but at the end of the day, my ceilings are not caving in, we have a back door, and there is plenty of storage. This space is so much better than the last one! With the larger space came a larger menu. Now, we have casual items like a tater-tot bar, buffalo wings, fried macaroni bites, burgers, etc. We do also have fine-dining options, but we have had to make some compromises. We do...... serve ranch. Haha Ian will probably never forgive me for caving on this, but I have promised him that our next restaurant will be completely up to him and we will make zero compromises. The next one will be just for the two of us.

As far as customers go, we still have our incredible tried and true customers along with many new, happy diners! Even people who didn't care for the Whitney Lee's vibe have fallen in love with Copper Vault. That being said, the people who didn't like us in the very beginning still do not like us. Whatever. Somebody once told me that if I opened a convent in Springfield, people would have protested it. I think that's a pretty accurate way to look at it. Ian and I are happier than we have been in a long time and even though I don't say it enough, I never in a million years could have done any of this without him. He is the most incredible chef in the world. He works every single position in his kitchen. He washes dishes every night. No job is below him and in an world with all of these executive chefs are being promoted on television who just stand on the line and bark orders at their staff, he is truly a great leader and example of what a real chef looks like. He will stay until 4:00 in the morning, scrubbing and cleaning until his kitchen is completely spotless. He has more integrity than almost anyone I know. He's right up there with my Dad, and Dad goes back through the drive through if someone accidentally puts an extra side of fries in his bag. Hahaha! Ian also taught me everything that I know about cooking in a restaurant and I am the fastest chef on the line. I am the luckiest woman in the world.

I am working on a blog post about how to open your own restaurant, so look for that coming soon! If you have any questions that you want me to answer in that blog, please leave them here! Thank you for reading! Xx

Going Out With A Bang!